Today I am bringing you a life update! Francis and I have bought a new place of our own to start our official life as a family of three!

To say it’s our dream home is an understatement. The moment we saw it, we knew. It felt so right. We could see ourselves living there. It just made sense. Plus, it was in the perfect location and in our price range. The best part about the house (in my personal opinion) is the charming gazebo in the backyard. Now for those of you that know me, I’m a sucker for a gazebo. I think they are magical. I purposely wanted to get married where we did because the venue had a gazebo. A lot of my wedding photos are in that gazebo. How many times can I write gazebo in this post? Ha!

I knew we had to have the place, but like any home you express interest in, you are competing against other people. Immediately after the inspection, Francis called the real estate agent and said he wanted to make an offer at the max price the vendors were asking for. We met two days later at the office to document the offer in writing and were told we would find out if we were successful in the next 24 hours. In the meantime, they were obligated to call the other interested parties and see if they wanted to make a higher bid. I was determined to stay positive and use the LOA (Law of Attraction) to manifest. If you want to learn more about this topic, click here. I referred to the property as already ours. I talked out loud about where I was going to put what furniture and how I wanted to decorate the place. I even set the picture of the gazebo as the background on my phone so I could look at it all day long. Finally, I envisioned the joy I would feel once we got the call saying we were its owners. I actually felt genuine happiness, even though it hadn’t happened yet. 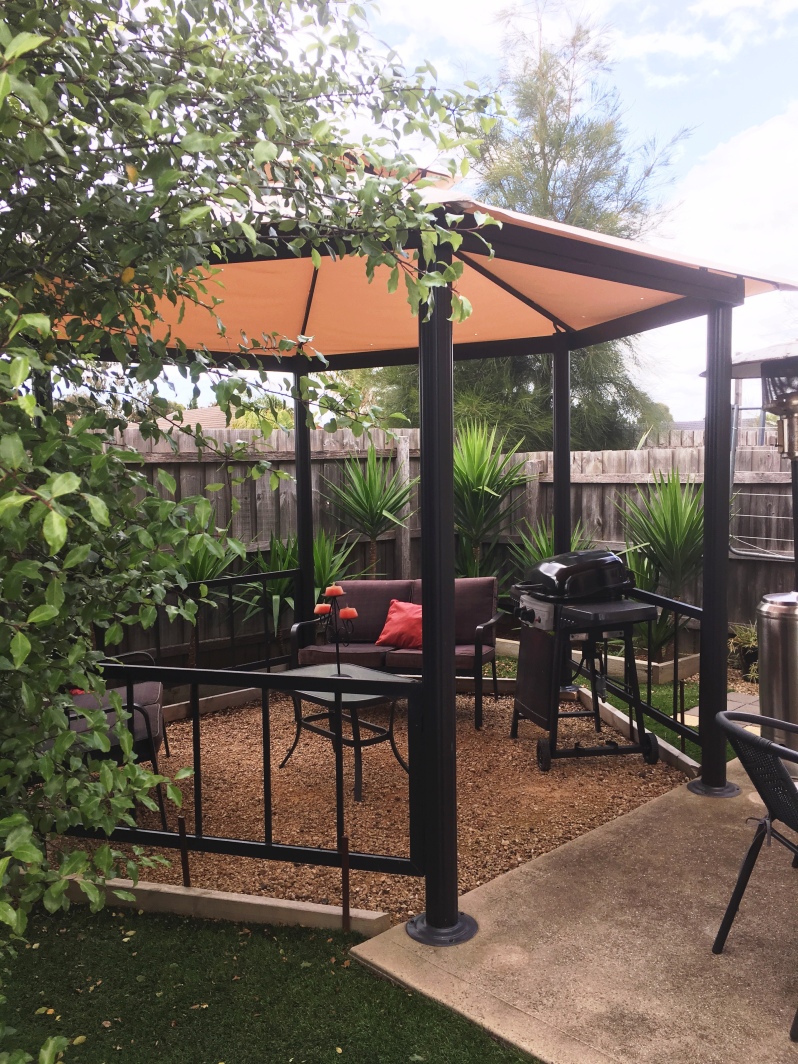 That night, not even 24 hours later, we got the call from the real estate agent. He said the vendors had realised they could probably have gotten more money for the place and were thinking about upping the price. Our hearts sank, but then the agent went on to say that the owners were also going overseas the very next day and just wanted to offload the property as soon as possible. He told us he would call back in half an hour with their final decision. That 30 minutes felt like an eternity. I was literally pacing up and down in nervous anticipation.

Just after 9pm, we got the call saying congratulations, the property was officially ours. We both jumped up and down in excitement. It was such an incredible moment. The agent said we had come in at the perfect time. That’s how I knew it was fate. It was meant to be our place. We had manifested our dream home and couldn’t be happier…

We move in on the 12th December, so there is much to be done in that time! I’m very grateful to my mum for letting us live with her during the first five months of Abigail’s life. It was exactly what we needed at the time as new parents. Another positive is that the place is only a 15 minute walk from hers, so we are still very close by! I’m so happy we didn’t settle for just any house. If you’re going to buy a home you plan to live in for a long time, you want it to feel right. We get to be in before Christmas which will be lovely. I cannot wait to make many happy memories there with Abigail and Francis, as well as anybody else that comes to visit.

Thank you for reading!

The Signs of the Zodiac Series

The Signs of the Zodiac Series

My Tweets
I was recently given the opportunity to interview the talented @joannapary about her upcoming release ‘It Will Just Be Us’ which is now published on my blog (link in bio) - go check it out to learn more about Jo, her spine-tingling new novel and her writing process! I’m so excited for this book to be released. It’s absolutely phenomenal and I will be posting a full spoiler-free review of it this Thursday on my blog so stay tuned for that. Thank you again Jo for taking the time to answer my questions and for giving such great insight into the wonderful world of writing! #author #bookstagram #books #book #horror #adultfiction #fiction #read #reading #bookworm #booknerd #bookblog #blogger #newrelease #interview
Onto book 4 of the @fortune_teller_readathon and I’m going for the prompt ‘A New Friend’ - read a book you think will be a new favourite. I’ve chosen ‘Eleanor Oliphant Is Completely Fine’ which follows Eleanor, a lonely lady who sticks to a very routine schedule. All it takes is one person to shake up her life and show her what she’s been missing... #bookstagram #books #book #read #reading #adultfiction #readathon #bookworm #booknerd
Happy Valentines Day to my other half 💖 thank you for making my life so sweet... photo by @themabelkwong #valentine #husband #love #partner #marriage
On Monday I underwent my first proper EMDR session. I was put into a type of hypnosis and asked to think of a traumatic memory I wanted to reprocess. The aim was turn the core belief of ‘I’m unsafe’ into ‘I am safe.’ It was a much more intense experience than I was expecting. At one point I struggled to breathe and couldn’t speak. I had tears running down my face remembering what happened when I was a teenager. At the peak, I began to sweat but soon after my body started to relax. We kept going until I felt completely at ease and the memory felt distant instead of clear. I already feel so much better but I’ve only just begun. The memory we reprocessed sits at a 5/10 in terms of traumatic. In a month I will be reprocessing a 10/10 memory and I know that’s going to be so much more difficult but worth the end result. EMDR has helped me process trauma in my body far more than years of just talking to a psychologist ever has. I’m really grateful to have found it 🌺 #emdrtherapy #emdr #therapy #trauma #ptsd #healing #nature #flower
Sorry I haven’t posted any bookish pics in a while! I’ve been busy and not reading as quickly as I normally do. Nevertheless I’m still participating in the @fortune_teller_readathon and I’m up to my 3rd book! The prompt is ‘Written in the Stars’ which is to read a 4 or 5 star predicted book. I’ve picked ‘Mr. Penumbra’s 24 Hour Bookstore’ which follows an unusual bookstore with strange customers. I’m intrigued! I’m tracking well in the Readathon and hoping to complete all the books on my TBR before Feb ends! #bookstagram #books #book #reading #read #ya #booknerd #bookworm #bookstore #readathon #library
I just posted a blog on how I manage my insomnia which I have been struggling with since Abigail was born. It started off with me obsessing over the amount of hours I needed to get in order to function as a full time mother during the day. Then I just didn’t expect to sleep at all, so I didn’t! However, I am finally happy to report that I am sleeping so so much better thanks to all my tips in the post. You don’t realise just how essential quality rest is until you aren’t getting it night after night. I cannot use the word ‘cured’ but it’s definitely ‘managed’ much better now 😊❤️ #insomniaproblems #insomnia #sleep #health #life #mother #motherhood #parenting #parenthood #baby